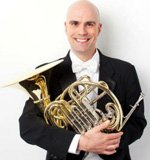 Michael Thornton was Principal Horn in LIYO from1989 to 1991 and won LIYO’s concerto competition and performed for the first time Richard Strauss’ Concerto No. 1 with LIYO in the spring of 1991.   Since then he has performed the concerto many times and now performs Strauss Concerto No. 2 more often.

As a soloist and chamber musician, Mr. Thornton has performed on five continents with a variety of ensembles.  These include the Colorado Symphony, National Arts Center Orchestra (Canada), Melbourne Musicians Chamber Orchestra (Australia), the Medellin Festival (Colombia), and many others. Michael Thornton was a guest solo artist at the 2008 International Horn Symposium, and has performed at many regional horn symposia as well.

Mr. Thornton became a member of the horn faculty at the University of Colorado in Boulder in 1999.  During his time at the University of Colorado, he has twice received the Marinus Smith Award for excellence in teaching.  His students come from around the country, and have gone on to orchestral positions, academic positions, and major conservatories.  His students perform around the world, and hold chairs in orchestras in the United States, Germany, Hong Kong, Jerusalem, Mexico, and Brazil, and Uraguay.