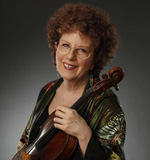 Q. When were you a member of LIYO and what did you play?

Q. What are some of the strongest memories you have from being in LIYO?
A. I still remember playing with LIYO [North Shore Youth Orchestra when I was in it] and getting to know violinist Richard Young. My first performance of the Mozart Sinfonia Concertante was with Richard as my co-soloist and the NSYO conducted by Martin Dreiwitz.

Q. What lasting lessons did you take away from your time at LIYO that you carry with you today?
A. Was very good to have the experience of playing some great orchestral repertoire with really nice people.

Q. Looking back, how would you say LIYO has led you to where you are today?
A. The experience of playing with LIYO helped me prepare for college and professional life.

Q. Did you go on any of the summer World Tours? And if so, what years?
A. No, I was in it before they started the summer tours.

Q. What advice do you give to current LIYO members?
A. If you really love classical music don’t give it up!

Since 1970 violist Louise Schulman has been widely recognized as one of New York’s most dedicated, versatile and gifted instrumentalists. She is a founding member [1974] and principal/co-principal viola of the St. Lukes Chamber Ensemble and Orchestra of St. Lukes, performing in virtually all of the group’s acclaimed concerts and recordings.
Ms. Schulman also has a major affinity for early music, performing on a variety of stringed instruments including baroque viola and violin, vielle, cittern, viola d’amore and viols.
Some of the groups she has performed and recorded with include the Waverly Consort, Philomel, Long Island Baroque Ensemble, Folger Consort, Breve, Clarion Concerts, New England Bach Festival, Ensemble for Early Music, the Alba Consort and Bacchinalia. Her solo recordings of Telemann and Vivaldi concerti [Music Masters and Essay labels] have won much praise from critics.
In the field of contemporary music Ms. Schulman has also made her mark. Since 1975 she has been on the performing and coaching staff of the Composers Conference, performing and recording numerous chamber works of gifted young composers, and is now the staff representative on the conference board of directors. Her recording of “Interviews” for viola and piano by Eleanor Cory is on CRI records.
Ms. Schulman gives frequent duo recitals with guitarist Bill Zito. Their CD, “An Italian in Vienna,” Duos by Mauro Giuliani [1781-1829] has been released world-wide on the Dorian Sono Luminus label.  Ms. Schulman also gives frequent solo recitals with piano, and concerto appearances. She also performs with the Strathmere Ensemble and Armstrong Chamber Concerts.