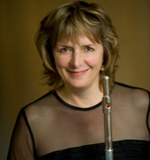 A native of New York, Linda Toote is the Principal Flutist of the Boston Lyric Opera. She performs regularly with the Boston Symphony and the Boston Pops and Esplanade Orchestras, having appeared as soloist with these groups on several occasions. She has held Principal Flute positions with the Tampa, Atlanta and Milwaukee Symphony Orchestras, and the Santa Fe and Lake George Opera Orchestras. Ongoing invitations from the Baltimore, Detroit and St. Louis Symphonies have included recent recording and touring with these orchestras.

Locally she has also appeared with the Boston Classical Orchestra, the Chamber Orchestra of Boston, at the Ashmont Hill Chamber Series and joined the Muir Quartet during a residency of the American composer, Joan Tower at Boston University.

A committed educator, and former member of the faculty of the University of Tampa and Emory University, Ms. Toote is currently on faculty at the Boston Conservatory and at Boston University, where she serves as the Woodwind Coordinator. During the summer months she is on faculty at the ARIA Institute, was an invited artist at the Northern California Flute Camp and has coached chamber music and masterclasses at the Tanglewood Music Center and serves as Director of the Flute Workshop of Boston University’s Tanglewood Institute. For the past four summers she has provided instruction at the Trevor Wye masterclass which she established in residence at Boston University. Her students have garnered accomplishments of their own, as multiple prize winners of the Pappoutsakis Flute Competition, at the New York Flute Club, the National Flute Association, at prestigious summer music festivals, and in orchestral positions locally, nationally and internationally.

From 2008-2009, Ms. Toote organized flutists from over 20 countries in four days of concerts and classes as the Program Chair for the 37th Annual convention of the National Flute Association, held in New York City. The convention saw a record-breaking attendance of over 4600 flutists. NFA convention appearances of her own have included those of Dallas, Washington D.C., Albuquerque, Chicago, Philadelphia, Anaheim, Charlotte and most recently in Las Vegas, where she premiered a concerto for both flute and piccolo by her Boston University colleague Martin Amlin. A recent board member of the National Flute Association, she has also written for both the Flutist Quarterly and Flute Talk Magazine. She has appeared as a guest artist and adjudicator at the Texas Flute Festival, judged numerous competitions at National Flute Association conventions, at the New York Flute Club and locally in Boston for the Pappoutsakis Competition, the Boston Youth Symphony and the Boston Woodwind Society.

Upcoming invitations include performances and masterclasses at the Long Island and New York Flute Clubs. Her recordings include many symphonic works with the Atlanta Symphony on the Telarc label and works of many genres with the Boston Symphony and Boston Pops.

Ms. Toote was a member of the Long Island Youth Orchestra in 1975-76. A graduate of the Mannes College of Music, where she studied with John Wion, Ms. Toote was also a student of Thomas Nyfenger at Yale University. Ms. Toote performs on a Braun piccolo and a Brannen silver flute with a Louis Lot headjoint dating from the nineteenth century.