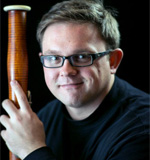 Bassoonist Karl Vilcins performed with the LIYO from 1993-1997, and was a part of their 1997 tour of the Pacific Rim.  After graduating from Long Beach High School in 1997, he went on to pursue a Bachelors Degree in Music Performance at The Ohio State University, studying with Christopher Weait.  In 2004 he received his Master’s Degree in Orchestral Performance from the Manhattan School of Music, with Frank Morelli.  Since graduating, he has participated in the Tanglewood Music Festival, and the Attergau Festival in Salzburg, where he worked with members of the Vienna Philharmonic.  From 2005 through 2011 Karl held the position of Principal Bassoon of the Houston Grand Opera Orchestra.  During the 2011-12 season, he served as Principal Bassoon for the Rochester Philharmonic Orchestra.  Currently, he is enjoying his new career as a New York City freelance musician and teacher playing with many groups including the Orchestra of St. Lukes, Orpheus Chamber Orchestra as well as being recently appointed Adjunct Bassoon Professor at LIU Post.

Regarding Karl’s experience with LIYO he reflects, “Growing up, I knew I wanted to be a classical musician.  Mr. Dreiwitz and the LIYO helped that happen.  In my 4 years there, playing fantastic repertoire at such a high level laid a strong foundation, giving me knowledge in ensemble playing that most young musicians only begin to experience in college.”