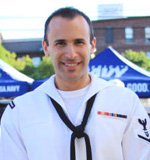 James Dissinger enlisted as a musician in the United States Navy in 2011.  He is currently serving as a trombonist with Navy Band Northeast in Newport, Rhode Island, one of only eleven Navy Fleet Bands worldwide.  Prior to his enlistment he performed for two years in the pit with the National Broadway Tour of Hairspray, which included a three-week engagement in Tokyo, Japan.  He has completed multiple contracts with several cruise lines including Royal Caribbean International, Princess Cruises and Azamara Club Cruises spanning all of the Caribbean, Mediterranean and Black seas and even up to Alaska and British Columbia.
James has earned degrees in Music Performance from The Crane School of Music at SUNY Potsdam and Florida State University, where he was awarded a graduate teaching assistantship.  He has performed with The Orchestra of Northern New York, Burlington Choral Society Orchestra, Sinfonia Gulf Coast and the Tallahassee Symphony Orchestra.  Additionally, he is the founder of an entertainment agency (www.topsailmusicians.com), recruiting highly qualified musicians for jobs aboard luxury cruise liners.
James was a member of LIYO from 1998-2002.  Regarding his years with LIYO James states that “during that time and as an alumnus I was afforded countless invaluable experiences and opportunities, including participation in two of the orchestra’s summer tours that covered three continents and the orchestra’s first concert at Carnegie Hall in 2002.  Weekly exposure for four years to a large amount of orchestral repertoire and other talented musicians was certainly the cornerstone of my own musical development.  Martin Dreiwitz and Susan Deaver’s unmatched dedication, leadership and expertise are the reason for it’s continued success and the success of its members.”