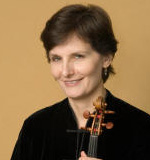 A native of Centerport Long Island, Erica Kiesewetter began her studies in Huntington with Mariana Chmelev and then William Amadeus Liva, with whom she studied until he took her to audition for the famous pedagogue Ivan Galamian at the age of 15. While a young player she enjoyed playing in the Long Island Youth Orchestra, participating in the 1973 tour to Germany and Scandanavia. She still retains many friendships and colleagueship from those years, and has many fond memories of her “firsts” with the orchestra; a Bruckner Symphony, Dvorak Romance, Don Juan. She is an admirer and fan of Maestro Dreiwitz and counts herself amongst many professional and amateur musicians alike who received their first training and great musical experiences under his leadership.

Ms. Kiesewetter went on to be educated at Purchase SUNY and the Juilliard School, and became the teaching assistant to the Juilliard Quartet. Among her teachers at school and in NYC were Ivan Galamian, Joyce Robbins, Gerry Beal, Emanual Vardi, and Charles Castleman. She is pleased now to be able to pass her knowledge on to the next generation. As a pedagogue Ms. Kiesewetter is a Visiting Associate Professor at Bard College where she maintains a violin studio in the music department and is the Director of Orchestral Studies at the Bard Conservatory. This past June she traveled to China, Hong Kong and Taiwan with the orchestra and as a chamber musician. She has also been on the faculty of Columbia University, and coached orchestra classes at Juilliard, Mannes, Manhattan School, Purchase SUNY, and the School for Strings. She is on the faculty of the Round Top Institute in the summers, and also specializes in giving workshops for overcoming performance anxiety.

Ms. Kiesewetter has been the concertmaster of the American Symphony Orchestra for the past 12 years and has performed the concerti of Sibelius and Berg with the orchestra. She is also the concertmaster of Northeastern Pennsylvania Philharmonic, Stamford Symphony, Opera Orchestra of N.Y., Amici New York, and the Long Island Philharmonic. She has appeared frequently as concerto soloist with these groups, and her performance of the Berg Violin Concerto with Leon Botstein and the American Symphony Orchestra recently became available on I-tunes. Her solo appearance on a recording of the music of Granados was nominated for a Grammy.  She has also been the concertmaster of the New York Pops and Eos, and has toured and recorded extensively with the Orpheus Chamber Orchestra. Her summers are divided between the Bard Music Festival, OK Mozart, and Round Top.

An avid chamber musician, Ms. Kiesewetter is the former first violinist of the Colorado and Dakota Quartets, and a member of the Leonardo Trio for 14 years. She received prizes as members of these groups at the Coleman, Evian and Concert Artist Guild competitions, and performed concerts with these and other groups in 49 U.S. States, Canada and many European and South American countries.  Erica Kiesewetter resides in Tenafly. N.J. and is the proud mother of Gabriella and Sebastian Spitz.